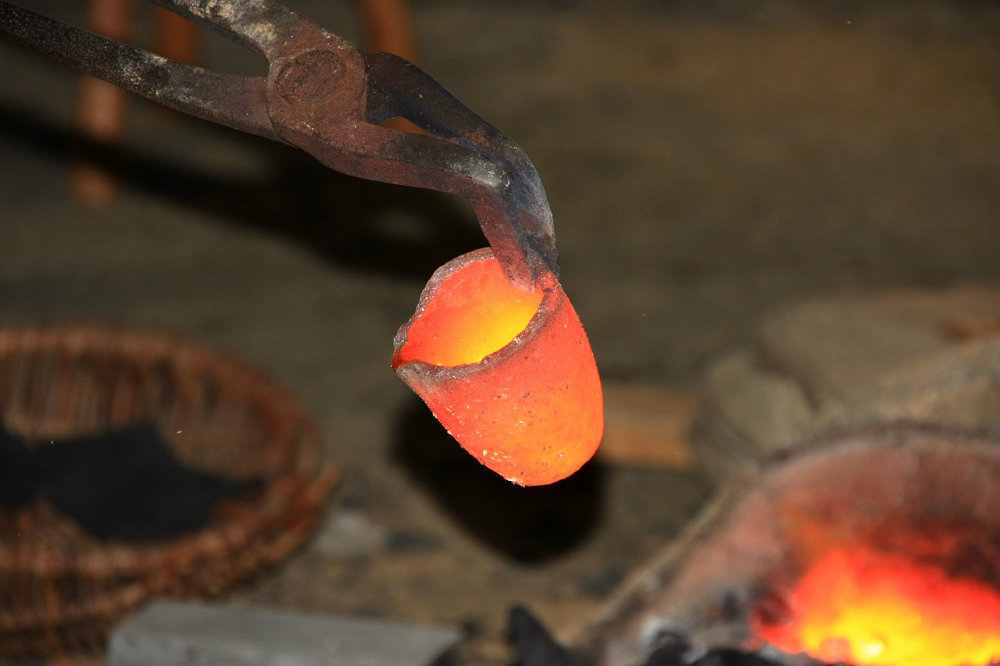 When you look at the story of human history, advancements across all levels of society are often influenced by the tools and resources that were available to us at the time.

The discovery of copper and bronze allowed us to move past the stone age and create stronger, more durable tools than what had been used previously. But copper and tin, the two components of bronze, were hard to come by and, therefore, were very expensive. There was a big demand for a stronger, more abundant material if one could be found.

Luckily, iron is the fourth most abundant metal on Earth, but there is a major problem with Earth’s supply: it does not naturally exist in a usable state. That’s because the oxygen from our environment will combine with iron to form unusable iron oxides. Before the true potential of iron could be unlocked, humanity had to first devise a way to efficiently and effectively refine iron ore.

In order to get usable, metallic iron, excess oxygen needs to be removed. The process of refining ore into a base metal, in this case by removing oxygen, is known as smelting.

The oldest form of smelting iron from iron ore is through the use of a bloomery.

A bloomery is a small structure typically made out of clay or a similar material in which iron ore is refined into iron.

Iron ore and charcoal are added to the bloomery and heated up. Over time, the carbon from the charcoal will combine with the oxygen in the iron ore to create carbon monoxide. This combination of carbon with oxygen leaves metallic iron behind.

This iron then would need to be worked with a hammer to remove excess impurities before it becomes usable.

While bloomeries were used around the world, their drawback was that they only made small amounts of usable iron at a time. If iron’s true potential was going to be unleashed, we first had to figure out how to smelt larger quantities of it.

The Role of Carbon in Iron and Steel Production

Before we get too far ahead of ourselves, let’s take a quick step back to examine the relationship between carbon, iron, and steel.

Carbon plays a crucial role in iron and steel production. Carbon is often involved during the smelting process, and the higher temperature iron gets, the more carbon it will absorb.

When iron takes on more and more carbon, it becomes harder and more brittle. Conversely, with less carbon, iron becomes more ductile and pliable. Therefore, the final amount of carbon in iron will have a lot of say in what characteristics that iron has.

Here is a quick breakdown explaining how the amount of carbon determines the final material’s properties.

Cast iron typically has between 2% and 4% carbon content. Cast iron is characterized by its high hardness and brittleness.

While cast iron is not pliable at all, it is fairly straightforward and simple to cast (hence the name) which is why it has been used for everything from skillets and cannons to ornate furniture.

Wrought iron typically has very low levels of carbon (near or under 0.08%). This makes it more pliable and a much better choice as a structural building material. For many years, wrought iron was the top material used for everything from railways to large structures such as the Eiffel Tower.

Steel is an alloy of carbon, iron, and other elements. Steel typically has carbon content between 0.1% and 2%.

During the refining process, the amount of carbon in the final material can be carefully controlled to dictate the specific characteristics desired from it.

The advent of the blast furnace allowed for higher levels of iron smelting as more could be smelted in a single run.

A blast furnace works by taking iron oxide and a flux material and heating them past their melting points.

A flux is a purifying agent that purges the iron oxide of chemical impurities. In this case, limestone and coke, a refined form of coal, were typically used as the flux.

Extremely hot air is pumped through the bottom of the furnace to facilitate the chemical reactions.

Eventually, this causes the production of carbon monoxide, calcium silicate, and metallic iron.

While the blast furnace allowed for much larger amounts of iron to be smelted at a time, it wasn’t without its drawbacks.

Since a blast furnace uses extremely high temperatures, the iron is heated up to a point where it readily absorbs excess carbon. This means that a blast furnace is only capable of producing what is called pig iron which has such high carbon content that it isn’t suitable as a material. If steel, cast or wrought iron is desired, further refinement of the pig iron is necessary to purge the extra carbon. Throughout history, this has been accomplished in a number of different ways. 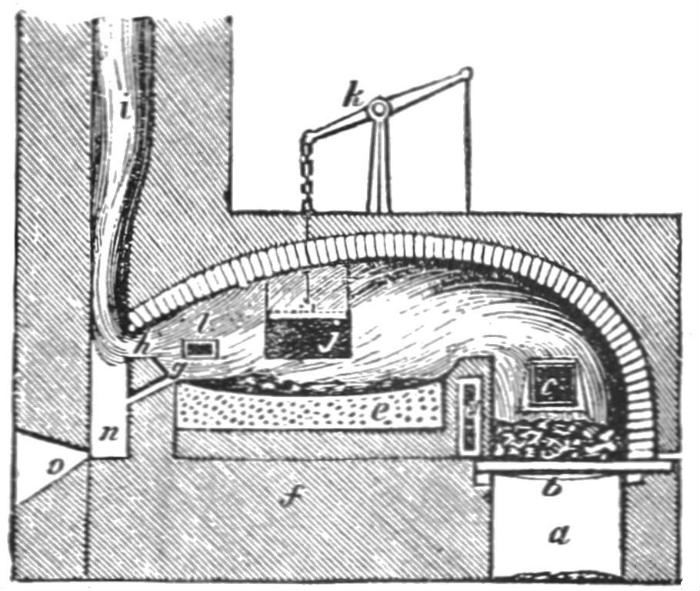 Originally, one of the ways devised to refine iron smelted in a blast furnace was through the use of a puddling furnace.

Puddling furnaces worked by placing pig iron in a special furnace specifically designed to keep the iron and the heat source separate from each other. The special design allows for the iron to be heated to its melting point while not allowing excess carbon from the heat source to mix with it.

Once the iron was melted, workers known as puddlers would stir the mixture allowing the excess carbon in the iron to combine with oxygen in the air.

While this did work, it was a lengthy and dangerous process – often with mixed results. The exposure to heat and dangerous gases meant that the life expectancy of a puddler was around the early to mid-thirties. 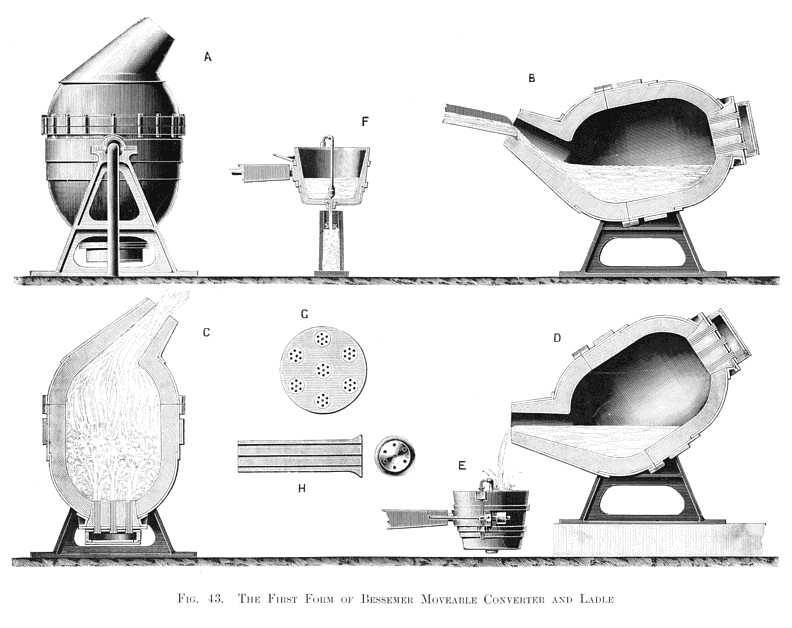 The first method of mass producing steel from pig iron was developed by Sir Henry Bessemer in the mid-nineteenth century.

Molten iron was poured into the converter, and hot air was pumped through the bottom. The combination of heat and air caused the oxidation of carbon and other impurities within the molten iron.

While the Bessemer Converter was not an immediate success, the basic principle behind it is still used today in the basic oxygen process of steelmaking.

While advancements in the steelmaking industry did not stop with the Bessemer Converter, this article shows the technologies and processes that allowed us to enter and flourish in the iron age.

Semiconductors: The smallest, smartest parts of our everyday world

In today’s manufacturing world, there is an increasing need for high precision manufactured parts, such…

The Benefits of Powder Coating Finish for Metal Fabrication

The Advantages of Stainless Steel-Updated for 2019